While it may seem like there are many models of the Apple Watch Ultra, in reality, there’s only one hardware model, with three types of bands. Each band has a different target market, though they overlap quite a bit. And honestly, any of the three bands can be worn for any activity equally well.

Note that while there are three core band variants, they do come in a handful of colors each. I don’t have all the colors, but that doesn’t impact the wearability. So in my case, I wore each band through a variety of workouts and daily usage, enough to get a good feel for things. In some cases – such as The High-Altitude™, I also wore it during a 70 km / 14 hour hike. You know, just to put it through its alpine paces. Meanwhile, for The Wave™, I wore that for both day usage, as well as an open water swim. And for the Trail Loop, for both workouts and daily usage. I also slept at least one night with all three types. Which, sounds wrong when you write it out that way.

Note one super important detail – aside from also coming in different colors, they also come in different sizes. I promise you, this will *ABSOLUTELY* make a difference between you liking the band and hating it. Size matters. Oh, and to preempt sizing questions. My wrist size is 17cm (or about 6.5 inches), and I’m 6’2”/188 cm tall. My wife seen in some shots here has a wrist size of 14cm (or 5.5 inches) and is 5’2”/ 158 cm tall.

Got all that? Good, let’s get rolling. 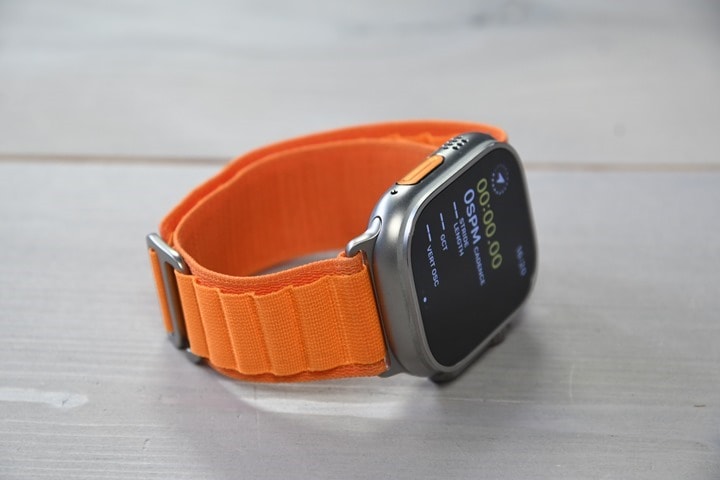 Based on all the feedback I’ve seen thus far, this is by far the fan favorite – at least visually. And if my opinion counts for anything, it’s absolutely my favorite design-wise as well. It just looks so sharp, both in person and in photos. It’s no wonder that Apple almost always defaults to this version in most of their Apple Watch Ultra marketing bits. It pops, is clearly recognizable, and says ‘Yo, I’m orange traffic cone meets $800 watch!”

The way The High-Altitude™ band works is that it doubles back on itself, and you latch the metal clasp into one of the little sewn loops. This actually has two somewhat interesting effects. Each adjustment (different hook level) that you pick impacts how loose the watch is. Which in turn, impacts optical HR (heart rate) sensor accuracy. So you might wear it on one specific hook for workout usage (where snug/tighter is better to prevent bounce, as bounce introduces accuracy issues), and then a different hook for daily usage.However, what you quickly realize is that you can simply count-off how many hooks you are from the top of the band. In my case, I’ll generally wear it on the 2nd to last hook for workouts, and 3rd to last hook for daily usage (using the large size model).There is no Velcro at all here. This is purely all about hooks and loops. The only adjustability is which loop you put the hook in, as that in turn ‘normalizes’ the rest of the strap, including how it fits when it wraps through the other side of the watch.

So removing it to charge is only happening every other day, and likely in less frenzied conditions than either an airport security checkpoint or the media-frenzy of the hands-on testing tables following the annual Apple keynote session. 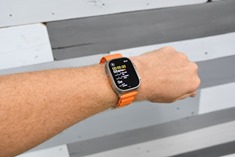 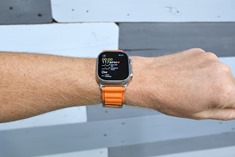 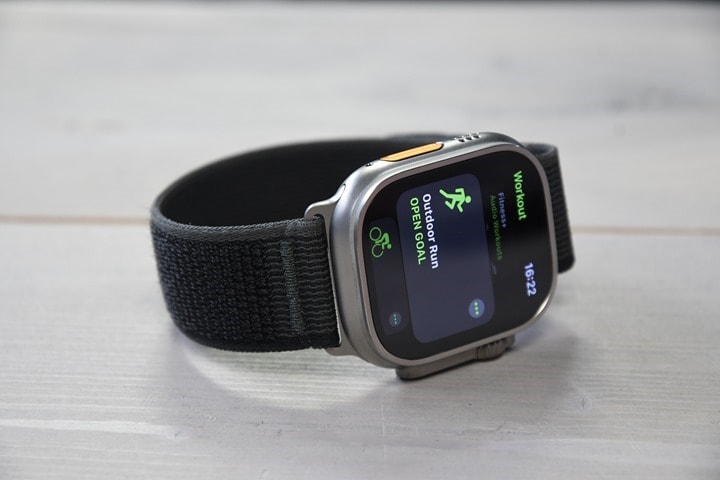 The Aspire™ is very similar to other trail-style watch bands we’ve seen from Garmin (on their Enduro watches), COROS (on their Pace 2 watches), and other companies. By no means did any of these endurance sport watches pioneer this concept – it’s been around a while.

The appeal of The Aspire™ style band is that it’s infinitely adjustable, and quickly adjustable. Given there are no pre-set holes/hooks/loops, you can get it exactly as tight (or loose) as you want it, ideal for optimum heart rate sensor accuracy. It’s also ideal when you want to tighten up the strap for a workout, but then quickly loosen it post-workout for a more casual feel. In my case, I’m wearing a medium/large strap. 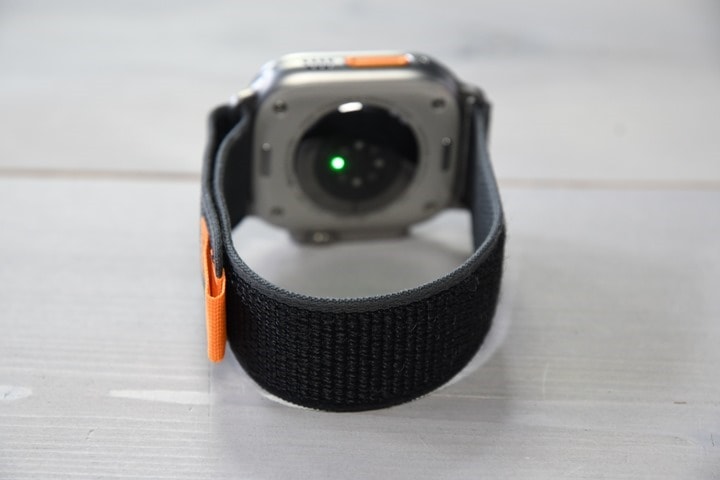 The strap snaps in both ends of the watch, and then loops onto itself. It has four Velcro pads, so it’s pretty darn secure. Companies often only have one or two Velcro sections, but this has four separate sections that act as a fault tolerance failover cluster. 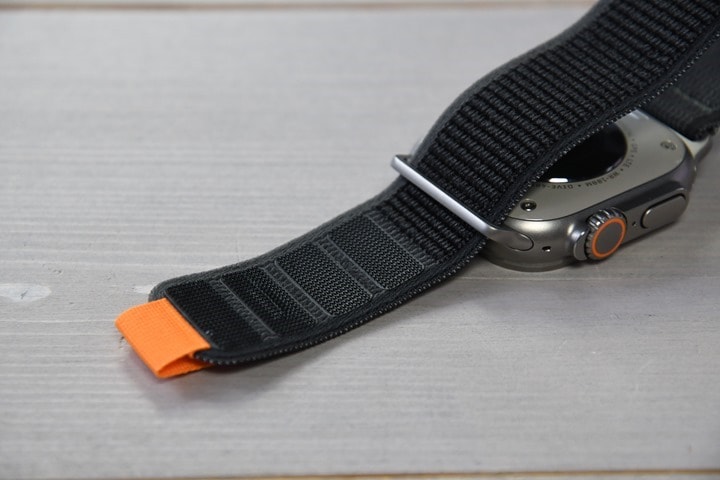 One tiny little nice touch on The Aspire™, is if you look above at the 2nd to the last Velcro chunk, it actually has a small rectangular stopper sewn into it. Meaning, it can’t go all the way out of the metal clasp system (whereas both Garmin & COROS fabric straps lack that). Now, that doesn’t mean it can’t fall off your wrist – because at that point it’s crazy loose. But, it does keep the strap from unraveling entirely. 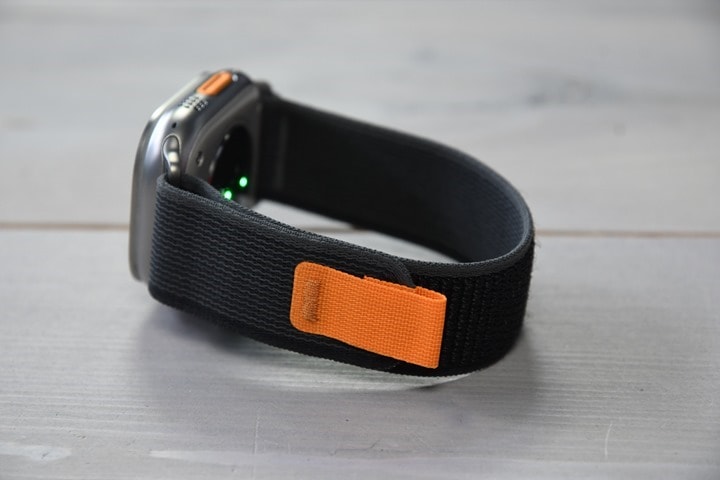 Like The Aspire™, it retains water after a shower. So, keep that in mind.

As noted earlier, this is probably my favorite strap in terms of wearability/usage and ease of adjustment, though I don’t find it as pleasing visually/style-wise as The Aspire™ one.  Also note that while I wouldn’t be that concerned about wearing this strap swimming, I would be super concerned with wearing it surfing – or any other potentially high-impact situation. With normal swimming, you’d feel it getting looser and flopping around if somehow the Velcro came loose. But with surfing, a wave could basically pull it off in an instant and you’d never have a chance. 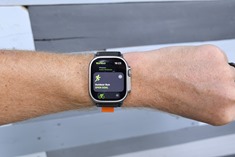 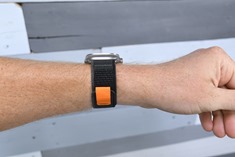 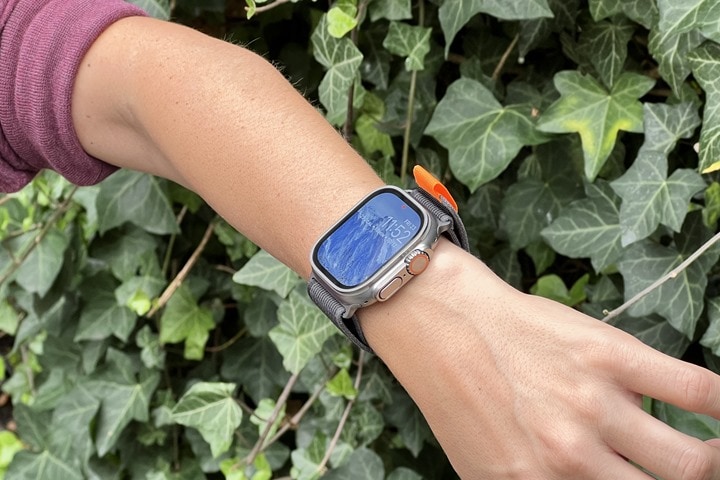 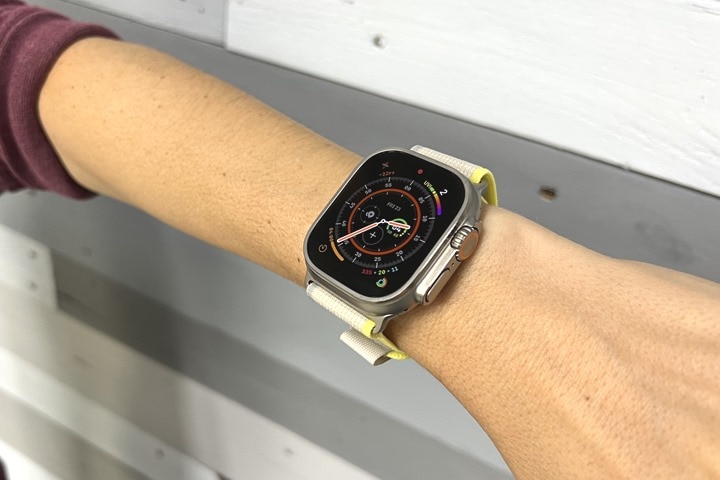 Color options: Note, there are three color options for this band, all available in small (fitting 130-180mm wrists) or medium/large (145mm-200mm wrists), they are: Yellow/Beige, Black/Grey (with orange accent bit), and Blue/Grey. 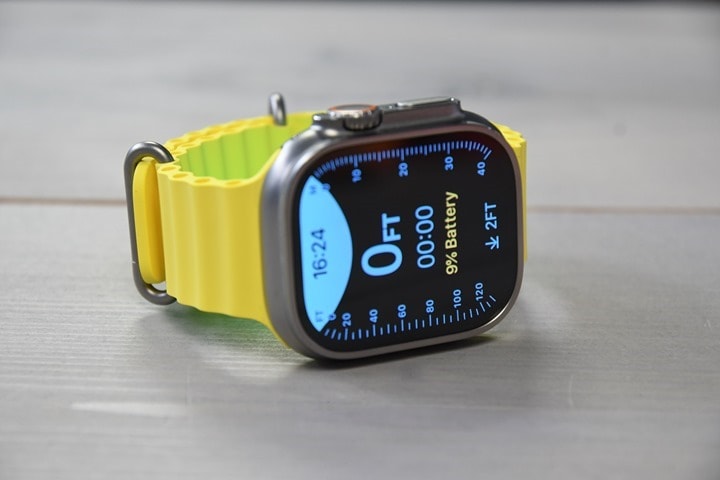 First up, and most importantly – this band is not a loop. I mean, sure, it has a gazillion little noodle-like loops and even a magical metal loop inside of it, but this is technically a normal watch band that doesn’t do a loop-de-loop. However, despite its lack-of-loop (LOL) status, it makes up for it with its slightly unique metal clasp system. This strap is also specifically designed to be a bit larger and more viable for fitting over wetsuits – and even has a secondary extension strap you can buy for $50. Of course, keep in mind if you put it over a wetsuit, you’ll lose any heart rate sensor-related data.

If you check out the parts, you’ve got basically three pieces: The top strap, the lower strap, and then a small metal thingy. The small metal thingy is actually an adjustable strap keeper, that ensures your strap doesn’t flop around. 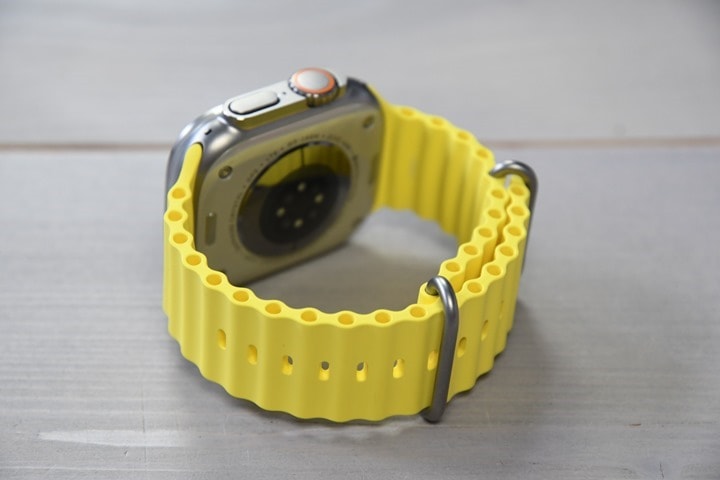 You’ll insert the top and lower portions like normal, and then you get to play trial & error with the carbineer-like metal thingy to find the right holes to stick it in: 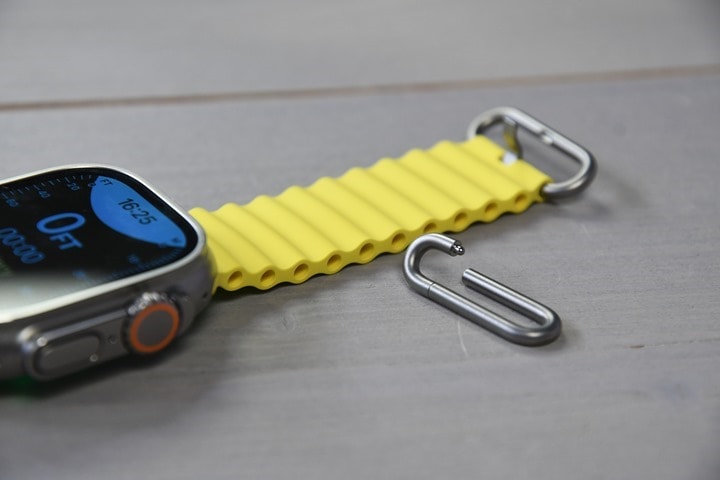 Essentially you’ve gotta find a hole that allows a snug fit when you want it for workouts, perhaps a slightly loose fit (one or two notches) for daily use, all while not having the extra strap piece flopping around like a kite in the wind. 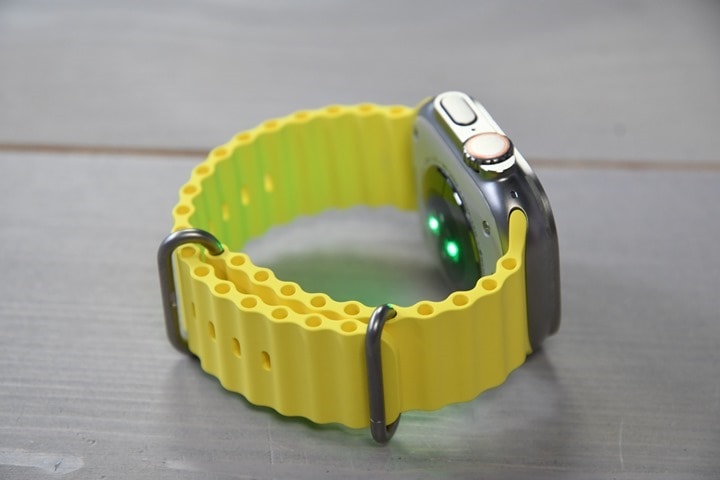 Anyways, once all that’s done, off ya go – wearing the strap. Obviously, with its silicon-like feeling, it feels the most rigid of the straps (technically it’s fluoroelastomer, which is a more expensive silicon variant). And because of that find-the-right-hole balance, it might feel too snug or too loose unless you get it just right. The benefit though, is that it doesn’t retain water. Take for example my open water swim yesterday: 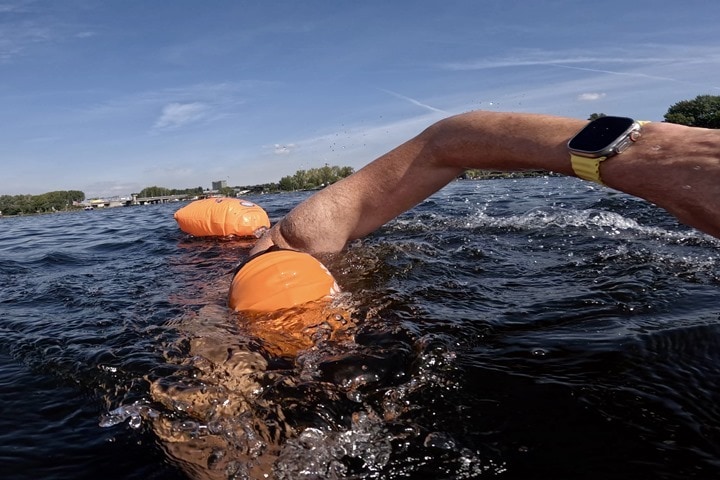 Water rolls right off after getting out of the water, and then again the same for the shower a short time later. Though, some water does stay inside the little noodle-like channels. So you end up getting random droplets later on. Giving it a shake or too helps get most of it out – still, at one point during a conference call 30 minutes later I was like “Wait, where’d these water drops on my desk come from?”. 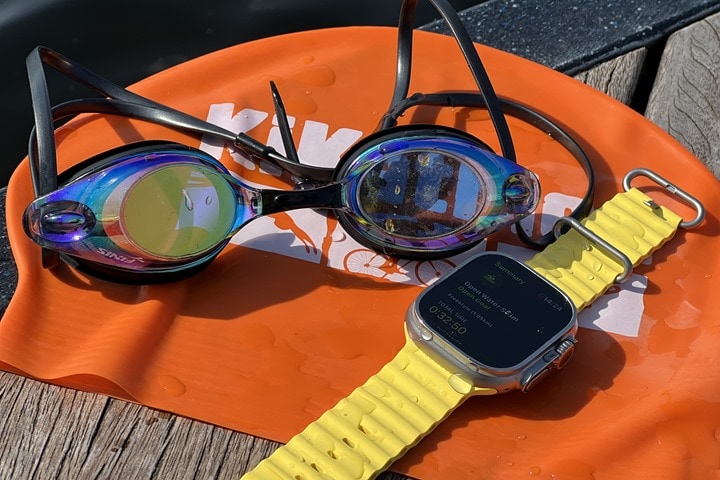 But don’t overthink it. Either of the other two straps retain water as well – and in that case, it lasts a fair bit longer. I like this strap, but it’s probably my least favorite out of the three. Obviously, if I have to rank them, someone has to come last. It doesn’t mean it’s bad, it just means it’s not first or second. 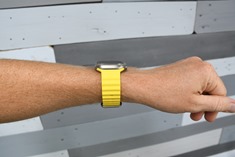 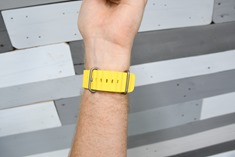 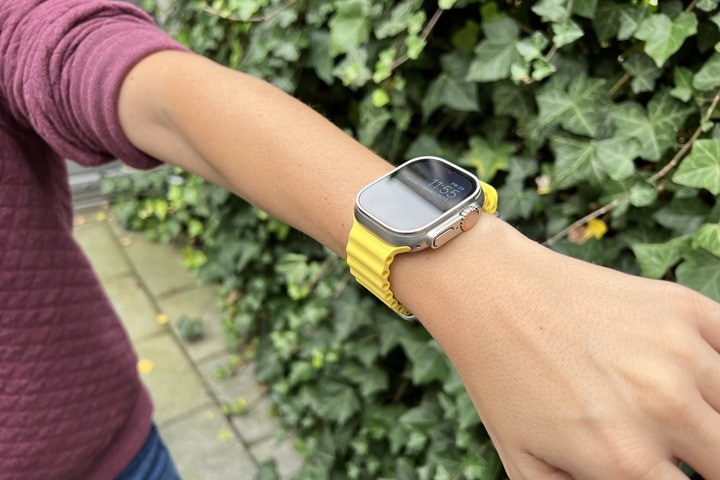 Color options: Note, there are three color options for this band, all available in a single length (fitting 130mm-200mm wrists), they are: White, Yellow, or Blue. However, there’s *ALSO* a 50mm extension strap that can be bought, for thicker wetsuits/dry suits or just gigantic lumberjack wrists. That extension is $49. 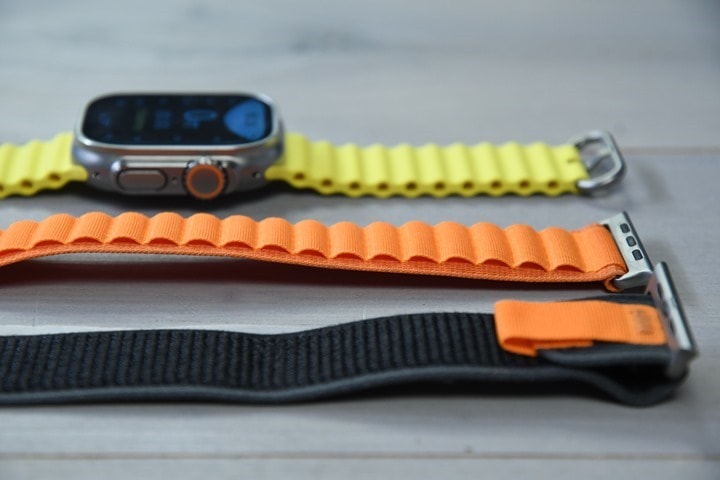